admin Posted on January 9, 2017 Posted in Blog No Comments 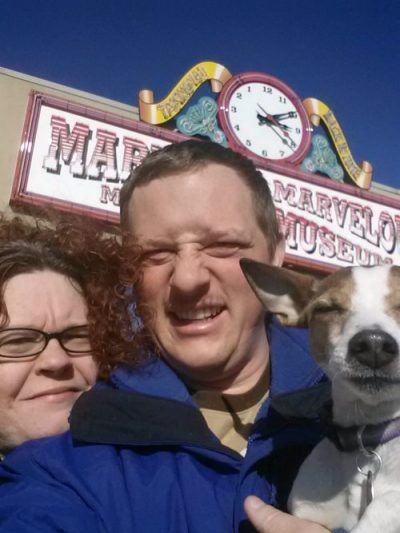 One of the many things Lee and I enjoy doing is traveling. We love getting in the car and just heading out for somewhere with only the vaguest idea of where we’re going and why. Sometimes, we’ll plan out at least part of a trip in advance and let the rest sort of happen as an adventure. That’s what happened one spring day nearly two years ago. It was early April and Easter weekend was approaching when Lee and I decided to take a road trip to Detroit. I don’t remember what originally planted the seed in our minds to head off to Detroit in the first place, but Lee had found a place he really wanted to see while we were there, so we planned our trip around it. That place was Marvin’s Marvelous Mechanical Museum; a cool, offbeat, quirky museum of vintage games, automatons and other amusements. I was hooked when Lee mentioned old fortune teller machines and carnival posters. We planned our trip, packed our bags and packed Lily’s dog treats and off we went. Yes, Lily came along for the ride. It was her first long distance road trip. We arrived in Detroit in the evening and planned to head to Marvin’s in the morning.

While there, we stayed at an urban farm in Detroit’s Brightmoor neighborhood. Our host was gracious, kind and very informative. We watched goats being milked and chickens greeted us when we woke up. Not what one expects from Detroit, but we loved it. We got to Marvin’s which is right outside of Detroit in Ferndale, MI about a half hour before they opened. It was cold in Michigan that day, very cold. The staff saw us waiting outside and opened early so we didn’t have to wait outside n the cold. Now, keep in mind, we had Lily in tow. We weren’t sure how that would sit with the staff at Marvin’s, but they were great about it. When they found out we had driven four hours to see the museum and that we’d come from Beaver Falls just to spend part of our day at Marvin’s, they graciously allowed us to bring her in with us. We’re not sure how Lily enjoyed the place, but we loved it! So many games, so much to see, so much to do! We were like kids in a candy store. Everywhere you look, there’s something cooler than the last thing you saw.

Many of Marvin’s mechanical wonders are the last of their kind. They have been lovingly preserved and maintained by a man who clearly loved the weird side of life. The place was a blast. It was the kind of place my roadside attraction loving heart skipped a beat for. Did I mention they had just about every old fortune teller machine ever made? They did. I have a fortune from each one. I’m a sucker for fortune teller machines. Lee put a token in every automaton that was operating. Lily didn’t seem to mind the time we spent oohing and ahhing over everything we saw. Our only regret was not meeting Marvin. He wasn’t in when we visited. After we left Marvin’s, we visited a local market. Each vendor we spoke to there asked us what had brought us to Detroit from Beaver Falls on Easter weekend. We told them Marvin’s. Every vendor had a story about the man. That dude was LOVED in the Detroit metro area. They said that Marvin was an animal lover and would have allowed Lily to stay and play with us all day long had he been in. Everyone had only great things to say about Marvin and his museum. We wrapped up our trip on Easter Sunday and headed back to Beaver Falls never having met Marvin. But, we did swear we’d return one day. This morning, we found out that Marvin had passed away. We are both saddened by his passing. His museum is still in operation, thankfully, it doesn’t appear that it is closing any time soon. It would be a shame to lose Marvin’s; it brings joy to so many people. That’s what Marvin designed it to do. We both hope his legacy continues.

We’ve been to many offbeat and quirky museums during our travels. Marvin’s is the first one where the original owner was still alive when we visited. All of the others were founded either decades or centuries before we visited. On our journeys, we’ve seen the famous Mutter Museum in Philadelphia, the Mercer Museum in Doylestown, House on the Rock in Wisconsin and Circus World Museum also in Wisconsin. We visited two different museums of Voodoo in New Orleans. We’ve been to numerous art and history museums as well. Me personally, I love the roadside attractions. Where else can you see the world’s largest carousel or the largest collection of original circus trains? Where will you find medical anomalies and an extensive collection of 19th century tools? Where else can you actually play old pinball machines and watch old automatons in action? My camera is filled with pictures of amazing things I thought I’d never in my lifetime see. When we visited House on the Rock, it had been on my wish list for over a decade. One of my favorite books is set, in part, at the famous landmark to just about all things weird in Spring Green, WI. Lee indulged me with a trip there after we visited Arty upon his graduation from basic training. I think I stood like a child staring at Alex Jordan’s collection of the wild and weird. The carousel is by far one of the most amazing things I’ve ever seen. I wonder if Marvin ever went there. It houses many of the things he loved to collect.

Our journeys to the strange places that make America so darn interesting have been many. We’ve seen some amazing sights and we’ve loved every minute of it. We’ve been like two very large children at play in some of the weirdest collections in the country. I’ve learned on these trips that when Lee says “The next place is a surprise,” I should just enjoy the ride and await something amazing. We’ve learned so much and seen things we will probably never see again. We’ve had a wonderful time on our journeys. Marvin’s was one of our first trips specifically to visit an attraction. We have nothing but fond memories. We hope that Marvin’s passing does not signal the end of a place that so many have loved. Moreover, we hope that Marvin is at peace. We hope his family and those who love him in Detroit are comforted by the amount of sheer joy he brought to people from all over the world.